And to round off an amazing four days, they got to record seven tracks in Studio Three at Abbey Road – the studio where Pink Floyd recorded their seminal album, The Dark Side of the Moon, in 1973.

The children all got to cross the famous zebra crossing outside the studio, immortalised on the cover of The Beatles’ 1969 album, Abbey Road. And in the souvenir to end all souvenirs, the mastertape is on its way to Normanby so that CD copies can be made and each child can have his or her zebra crossing photo on the cover. 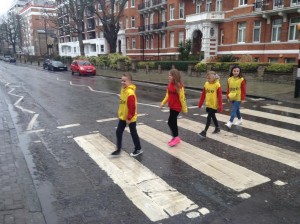 The school’s music leader Sonia Herlingshaw, who organised the trip with music teachers Chris Nixon and Kath Pentney, said: “We didn’t just want to go on a normal tour – we aren’t like that here, we like to do things to the max!

“The parents kept coming up, saying ‘we can’t believe our children are getting this type of opportunity’. And because we did real-time updates on Twitter and Facebook, it meant they could keep up with what we were were doing. We even told them to all log on at 8.30am on Saturday to see us on the Abbey Road zebra crossing.”

By publicising their performances in advance with flyers and posters, it meant the children always had an audience wherever they sang. But for Sonia – who made the X Factor boot camp stage in 2008 with girl group Pure Elements – two moments stood out: when the youngsters were joined by Topline Youth Choir members in Westminster Abbey to produce a stunning sound and, of course, the once-in-a-lifetime trip Abbey Road session.

She said: “The recording studio experience, where the children wore headphones and had to sing each song several times, showed them how difficult it is to be a pop star! And they were really impressed by all the names who have recorded there, even if they hadn’t heard of Pink Floyd. 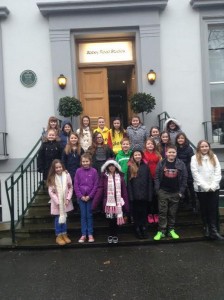 “But the trip exceeded all our expectations. The children did themselves proud and it gave them a very special, lasting memory.”

Headteacher Carl Faulkner, who “couldn’t resist” dropping in on the Abbey Road sessions, said: “I’m so proud of the children, the level to which they have taken their performance and their commitment to getting ready for the tour. It has been an inspiration and a joy to see. And it’s no exaggeration to say I had hairs standing up on the back of my neck, seeing and hearing our children in such a famous studio.”

But how can the school possibly top their London trip? Sonia laughed: “Some of the kids are asking ‘can we go to Ibiza, Miss?’ I’m not sure about that, but we’ll try and think of something.”

We use cookies on our website to give you the most relevant experience by remembering your preferences and repeat visits. By clicking “Accept”, you consent to the use of ALL the cookies.
Cookie settingsACCEPT Read More
Manage consent

This website uses cookies to improve your experience while you navigate through the website. Out of these, the cookies that are categorized as necessary are stored on your browser as they are essential for the working of basic functionalities of the website. We also use third-party cookies that help us analyze and understand how you use this website. These cookies will be stored in your browser only with your consent. You also have the option to opt-out of these cookies. But opting out of some of these cookies may affect your browsing experience.
Necessary Always Enabled
Necessary cookies are absolutely essential for the website to function properly. This category only includes cookies that ensures basic functionalities and security features of the website. These cookies do not store any personal information.
Non-necessary
Any cookies that may not be particularly necessary for the website to function and is used specifically to collect user personal data via analytics, ads, other embedded contents are termed as non-necessary cookies. It is mandatory to procure user consent prior to running these cookies on your website.
SAVE & ACCEPT
Admin